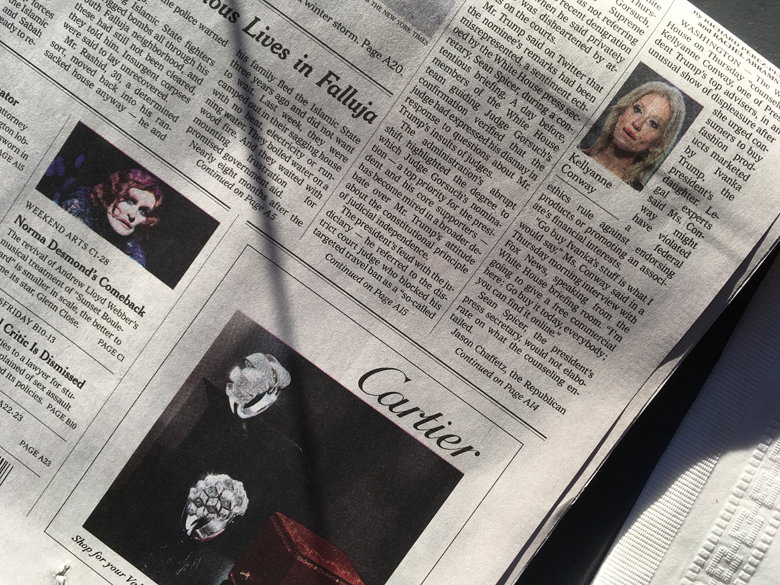 After the death of Velázquez, [Juan] Carreño [de Miranda] showed himself to be the artist most worthy of continuing the depiction of monsters, jesters, and dwarves that inhabited the Spanish court. Inventories show that the Alcázar possessed a large number of portraits of this kind by Carreño, among which are the two of The Monster…

The name of the girl depicted in this painting is Eugenia Martínez Vallejo, and she was born in Bárcenas. In 1680, she was brought to court to be admired as a monstrous manifestation of nature. She was six years old at the time, and already weighed almost 70 kilos, or 154 pounds.

She probably only attended celebrations and gatherings in the palace in order to be seen by the royals and their guests, for according to José Moreno Villa (who found no financial accommodation for her in the palace records), she appears not to have been a part of the service-class at court. In that same year of her arrival, Juan Cabezas published his True Relation in Which Notice is Given of a Great Prodigy of Nature That Has Arrived at This Court, in the Person of a Giant Girl-Child Called Eugenia, Born in Barcena [sic], in the Archbishopric of Burgos.

The publication was illustrated with a woodcut and republished in Seville and Valencia. Through Cabezas we know that Charles II commissioned the second Apelles of our own Spain, the famed Juan Carreño, his painter and aide-de-chambre, to paint a portrait in two manners, one nude and the other in fine dress.

The description of Eugenia written by Cabezas could not have been more sympathetic, showing how far Carreño must have gone to infuse some degree of dignity into her enormous figure: She is white and her face is not terribly unpleasant, although very large. Her head, face, neck, and other features are of the size of two men’s heads, or thereabout. Her stature is that of an ordinary woman, but her massiveness that of two women. Her belly is so vast that it equals that of the largest Woman in the World when she is within days of giving birth.

Her Thighs are so very thick and fleshy that they ride one upon the other, and they conceal from sight her private parts. Her legs are little less than the Thigh of a man, and they and her Thighs have such rolls of flesh that they ride one upon the other with shocking monstrosity, and although the feet are in proportion to the Edifice of flesh they sustain, the result is that they are almost like those of a man. She moves and walks with some effort, due to the inordinate greatness of her body…

In 1941, Gregorio Marañón pointed out that this young girl represented the first known case of hypercorticism, and also that from the girl’s decisive grasp on the fruit in the portrait of her clothed, she must be left-handed.

To show Eugenia naked, Carreño employed an approach extremely rare in Spanish painting: the mythological portrait. He placed the girl against a neutral background and had her lean on a pedestal laden with bunches of grapes; he crowned her with grape vines… and in her left hand had her hold another bunch of grapes, whose leaves covered her sex. Costumed, then, as Bacchus or Silenus, Eugenia lost much of the freakishness of her appearance and could almost have been confused with a depiction of Bacchus as a child.

It is possible that the two paintings of Eugenia were still unfinished upon the painter’s death, though he kept them in his workshop until the end, in 1685.

The nude, along with the other painting of the pair, The Monster Dressed in Finery, was in the royal collections until 1827.

After being taken to the Alcázar… it went to the Zarzuela Palace, where it appears in the inventory taken in 1701. In 1827, the Monster Dressed came to the Prado, while… the nude was given as a gift by Ferdinand VII to artist Juan Gálvez…

In 1939 [it was] donated to the Prado, making it possible for the two portraits to be reunited (Álvarez Lopera, J.: El Greco to Goya. Masterpieces from the Prado Museum, Museo de Arte de Ponce, 2012, pp. 126-127). [https://www.museodelprado.es/en/the-collection. Paragraph breaks inserted by E.D. for ease of legibility.]

All right, Mr. Bakhtin, I’m ready for my close-up…

Some time around 430 B.C., sponsors unknown threw a sculpture competition in Ephesus, the subject: Wounded Amazon.

The full number of participants, likewise, is not available to us, but Pliny the Elder records the presence of bronze statues by Polykleitos, Phidias, Kresilas, Kydon and Phradmon in the Artemision (by then the temple of Diana) when he visited there ca. 65 AD. Pliny also notes that the judging was done by the artists themselves, with Polyclitis winning first prize. More than one scholar, however, regards this as a confabulation.

The bronzes, of course, are gone – who knows where? What we do have are numerous Roman marble copies, based, presumably, on the originals and now organized by art historians into five distinct types. What the types hold in common is the standing figure of a young woman with short, wavy hair, her right arm raised as if to parry a blow, yet without a sense of forceful intentionality in the gesture. The Amazon’s peplos has fallen from her shoulder to reveal or both breasts. She does not, certainly, look happy. Neither agonized. Her gaze seems internally directed, she is not looking out there.

It is said, by Pausinias, Strabo, Herodotus and others, that the sacred site at Ephesus was founded by Ephos, queen of the Amazons toward the worship of the “many-breasted” Anatolian goddess Kybele who merged with the Ephesian Artemis and later mutated into Diana.

Though the index of the World’s Wonders vacillated through the centuries, finally concretizing in the Renaissance, the Artimision consistently ranked among the magnificent Seven. Of the temple’s architecture, Antipater of Sidon, an early compiler of Wonders lists, wrote, ca. 100 BC: I have set eyes on the wall of lofty Babylon on which is a road for chariots, and the statue of Zeus by the Alpheus, and the hanging gardens and the colossus of the Sun and the huge labour of the high pyramids, and the vast tomb of Mausolus; but when I saw the house of Artemis that mounted to the clouds, those other marvels lost their brilliancy, and I said, “Lo, apart from Olympus, the Sun never looked on aught so grand.”

Five sculptors walk into a temple…

Later, in Pergamon, the Amazon is supine and either dying or dead…

The what of the how

“There’s a deficiency of the state in France and Italy, so I take action.” Said Cédric Harrou an olive grower in the Côte d’Azur, convicted and fined for sheltering migrants from Sudan and Eritria. “We’ll carry on, because it’s necessary.”

Through a looking glass darkly, Alice

The territory of UkRhein. Putin wants it.

In social life, there is no bottom floor. There is only where the elevator stops.

Hence the association. As with ba, eight, and ba, wealth.

Similarly but oppositely, the number four is a near homophone for death. Certain buildings in Hong Kong, in accordance with both Chinese and European superstitions, omit a host of numbers unlucky enough to either be (or include) a four as well as thirteen, making it possible to ride the elevator up to the fiftieth floor of a thirty-five story building.

In KL, the twin Petronas towers, each have eighty-eight actual stories, the inherent good fortune of the total, presumably, cancelling out any negative numerical effects from the inclusion of fours and thirteens.

And everyone knows that pianos bring good luck upon their owners! Except, that is, for the Imperial Bösendorfer, which has a ninety-seven keys, and therefore represents a mixed blessing since nine is fine (associated as it is with the Emperor and being a near-homophone for long-lasting, to have enough and to save) but seven has some negative associations with loss, bullying, deception…

Luck if you’ve ever been a lady to begin with

Luck be a lady tonight…

Interculturally things get complicated tho. For example: Fu ba (bats eight, or bats prosperous) is a near homophone for the American military slancronym FUBAR. Fortunately SNAFU doesn’t resemble anything in Mandarin… but BOHICA sounds like it could be Japanese…

The bride walked down the aisle to the “Jurassic Park” theme. In another nod to her favorite film, the wedding cake was topped with two velociraptors… three of the groom’s cousins wore their family kilts… [From “Vows,” NYT, 2/12/17]

I was a discalced Carmelite for the…

If two offspring of a singe pregnancy complain at the same time, are they twinging?

Let the emperors defend themselves!

Heroic nudity, as in Praxiteles’ Aphrodite of Knidos, or David’s Leonidas at Thermopylae.       Pathetic nudity, as applied to courageous, defeated barbarians, e.g. the genres of Wounded Amazon or Dying Gaul).

Forensic nudity, as in…

There are eight million voice-overs in the nude city. This has been one of ‘em…

So, uh, what would, like, a heroic fallacy, be?