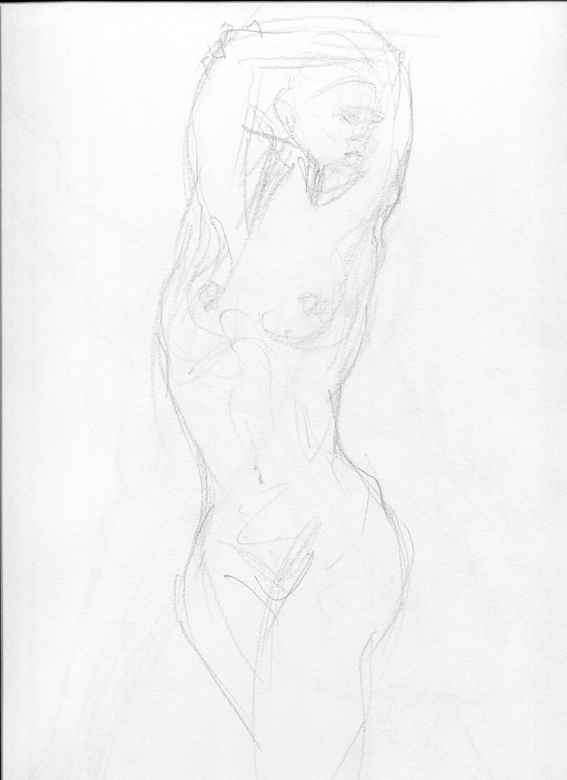 Water into wine. Jesus’s first miracle, according to John, performed at the Wedding Feast in Cana, when the spirits ran low.

Dionysus too had done something of the kind for the Andrians (inhabitants of Andros who had builded him a temple), by creating a river of wine for them to get schnoggered on. One or more of the several Philostratuses (a Sophist-icated clan ca. 2nd and 3rd centuries A.D.) apparently saw a painting of this wonder in Naples and described it in Eikones (Images) a didactic work in two volumes intended for the art education of the young.

Titian reimagined the scene in his The Bacchanal of the Andrians, a work much admired, and copied, by Rubens.

Rooted in, yet springing from the earth

“We lack,” says Yale historian Timothy Snyder (who has equated the fall of the Weimar Republic with our current political situation), “the concepts that we used to have that allowed us to connect ideas and political processes.” [Interview in Süddeutsche Zeitung 2/7/17.]

It’s an interesting observation. Bracing, and with the ring of truth. But did we “used to” have these concepts in a reliable, enduring sort of way, or were they intermittent? Or could they be seen as an evolutionary moment in social thought whose moment, at least for now, has passed. At different stages in our personal lives as well, we “have” awarenesses, that are not available to us other times. Awarenesses that are available to us for reality construction during infancy differs in discernable ways from when we are six. Though I really can’t remember.

(But seriously) what if the equation between what we call ideas and what we call political processes is, or was, specific to particular cultural circumstances, such as those which existed in the heyday of the republican idea(l) itself? A kind of Age-of-the-Reasonable-State-era aha! that immediately began to concretize on the one hand and evaporate on the other.

Of course we might ask ourselves about those things we assumed to be entitlements and now appear no longer to possess, and to make dire comparisons between then and now. But we could also ask, and even think about, how a host of observable circumstances are disposed toward transformation – toward new potential configurations, in all their as-yet unknown-ness.

As for the Hitlerizing of Trump, do not all authoritarian regimes operate, essentially, in the same strategic mode? Do they not arise, with their “solution” of Unity Against Them, out of a critically depleted state of the common?

“We have, at most, a year to defend American democracy, perhaps less… We need people who can help translate ideological utterances into political warnings…” Snyder continues.

Perhaps such people could have helped, back when savvy interpretation of such utterances might have proved dispositive, at least in some folks’ minds. But do we need, as in don’t have them, or are they (we) extant and are “warnings” simply ineffective in shifting the larger tide?

It’s an apocryphal story, but an appealing one, that Kaiser Wilhelm called Von Molke with second thoughts about the invasion of Belgium, only to be told that the trains had already crossed the border.

Each morning I wake up and say “Thank you, G*d for not making me a Yale historian!”

Oddly too, Snyder’s arguments make one nostalgic for the ‘30s (when people understood ideology for what it was and made bad choices anyway), even if one wasn’t born yet… The idea that, somehow, Lindberg’s America First would be preferable to Trump’s if we could only reconstitute the real thing from its DNA…

If I had a hammock…

Siri, what is virtue?

Observe the terrain. In expanding and contracting, coming and going, distinguish the terrain: the distance and defiles, whether it is broad or narrow, whether it contains dead or alive things. The body form contains movement and non-movement. Combine the inner and outer into one Dao. [Sun Lutang. Joseph Crandall, trans. Bagua Quan Xue. Pinole, CA: Smiling Tiger Martial Arts, 2002. p. 18. Quoted in Tom Bisio, Beyond the Battleground, Berkeley, CA: Blue Snake Books, 2016. p. 8.]

To lead a silent mind, you must first fill it with words.

The exceptional is overrated

The next stop on this Manhattan-bound Number 2 train will be Burro Hall.

It’s the city that molded you into the person you are now, infusing you with grit, compassion, and endless ambition. [From an ad pitching St. George’s Medical School (Grenada) seen on the above subway train]

But yes, aha, from a personal standpoint, diagnostically-speaking, that infusion of grit explains a lot.

Infusions of grit have been known to cause internal abrasions, sometimes severe, occasionally life-threatening. Common sequela include, but are not limited to: hyperempathy and (over the Queens) borderline megalomania. “Ambition,” even the endless variety, doesn’t cover it by half.

They are trampling out the vintage

Where the grapes of Rothschild are stored…

It’s all the same to the cannoli 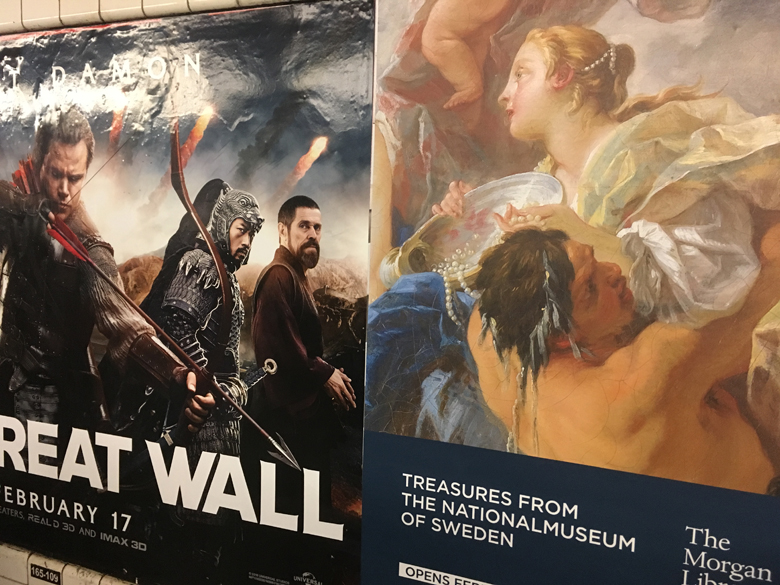 Once upon a time there was a little Buddhist cop…

Oh, you take the Deep State

And I’ll take the Rogue State

And I’ll get to nihil afore ye…

Blame it on the Hakenkreuze

With its magic spell…

Marcus Pretzell, a member of the far-right party Alternative for Germany… [“German Newspaper Says Its Sorry for ‘Mob’ Article, NYT, 2/17/17]

Hooked, twisted, it’s all the same to the Pretzel(l)

Even when the Hakenkreuz isn’t worn on the actual sleeve, you can sense the internal Pretzell…

At any Gibbon moment, things seen and unseen are rising, and falling, and always swinging

No wall can stop the mongrels…

“Is It Time to Call Trump Mentally Ill?” Richard A. Friedman opeditorializes in the Times.

No, Richard, it’s too late.

But, on the other hand, a broken clock is right twice a day…

Experts fear the growth of antler-semitism in America!

The great wall of resentment

What does it keep out?

What does it hold in?

It is important at this point to state that there is no one definite principle available a priori and enabling a classification suitable for every purpose to be made….

The necessity of introducing some classification and the caprice attaching to it is most striking…in history (where) the necessity continually arises of making distinctions which are seen on closer consideration to be fluid and inadequate.

So wrote Max Planck in his Philosophy of Physics (1936).

We’re going to hell in a hand-Brexit

What arrondissement is El Prado in?

What strange hybrids abound in the Garden of False Commonality!

Draw such energy as you can from the animals and plants around you.

The people are likely to be toxic.

Cultivate the warmth and illumination of inner fire with your nearest and dearest.

David Teniers, court painter to Archduke Leopold Wilhelm Hapsburg, the Governor of Flanders, and keeper of his very fine collection of painting and sculpture, made several of these gallery portraits. The Archduke (in tall hat) is depicted showing to visitors the wealth of his pictures, most of them Venetian, almost half of them by Titian. Other Venetians represented are Giorgione, Antonello de Messina, Palma Vecchio, Tintoretto, Bassano and Veronese; also there are Mabuse, Holbein, Bernardo Strozzi, Guido Reni and Rubens. The sculpture supporting the table representing Ganymede, is a bronze by Duquesnoy the Younger. Teniers himself is represented as the figure on the far left.

It has been suggested that Velázquez borrowed the device of the half-open door at the back of this picture for his Las Meninas; at least Last Meninias can be understood as a similar picture [?!], designed to illustrate the enlightened patronage of the patron and the corresponding pride of the court artist. [Alfonso E. Pérez Sánchez et al, (trans. Unacknowledged, The Prado, London: Scala Publications, Ltd. 1993, p. 219]

(Half-open door) at the back of this picture.

At the back of this picture!

Ah, that’s what Plato was saying! Some of it anyway…

Pliny and Quintilian report that Lysippus said of himself that earlier artists had “made men as they are,” whereas he made them as they appear to be.

Lysippus had, in any case, modified the canon of symmetria in the direction of a more complete illusionism. Truth of proportion bent before the dictates of the eye. As Vasari would later write, regarding sculptural realism: “If the numbers are right, but the eye is offended, the eye will not cease to be offended.”

But back when “pure” proportion ruled, two sculptors working on separate halves of a joint work were so precise in their measurements, that when the pieces came together they joined perfectly.

At the back of the picture…

‘round the tapestry’s corner…

The other side of the fresco…