A detail, among details: the lettering cast in relief within the ellipse at the base of the iron pilaster, just to the right of HOURS, reads: D.ESDHOR. 155.EAST 53,ST. NY.

This address no longer exists: the lot was subsumed into the footprint of 601 Lexington Avenue, aka, Citigroup Center, built as the bank’s HQ in 1977 with a distinctive-from-afar chisel-slanted roof. The tower is around a thousand feet high, comprising fifty-nine stories and a million and change feetsworth of office space.

According to http://www.waltergrutchfield.net, D. Esdohr, owner of the foundry at 155 East 53rd Street, is listed as both Dederick Esdohr and John D. Esdohr in city directories from 1873 to 1903. The 1880 U.S. Census has him residing at 893 Third Avenue and gives his age at the time as 42. Esdhor, an immigrant from Germany, was the father of two daughters, one aged 16 and born in Bremen, the other, age 12 and born in New York. Esdohr’s widow, Johanna Esdohr, appears in the 1900 Census, age 58, living in Brooklyn and employed as a “housekeeper.”

893 Third Avenue, where Esdhor lived, would have been less than a two block walk from the foundry. Neither the building, nor the address, still exist. The space is now occupied by the northeast section of the Lipstick Building’s plaza. On cross streets nearby, however, one finds occasional row house, singly, doubly or in multiple clusters, of the general type that the Esdhor’s lived in, dating from the 1860s and ‘70s and today housing a restaurant, nail salon, dry cleaner or other service business in the storefront, generally several steps below street grade.

The exposed pilaster in the photo above came to light recently, as a result of the high retail turnover rate along the Avenue. For years, perhaps generations, it had been hidden by whatever more modern-seeming street-level façade the building owner had stuck up there. Then a new Thai restaurant replaced I forget what, and the renovation revealed the castings of Mr. Esdhor and his workmen. It is likely that under the metal sheathing of the neighboring hardware store stands an identical pilaster waiting on its moment in the sun.

The truth will set you back

An orientation (or occidentation) leads to a system of practices

Which in turn affirm, legitimize and concretize one’s orientation…

The truth will set you up

Tartuffe will set you free

Clausewitz is a continuation of Kant by other means

Success, by whatever means* carries with it a legitimacy of its own

*and for whatever causes

The machine has a lot of moving parts.

And the machine is not a machine.

One supona time, ca. 1125, the Byzantine princess Anna Komnene, daughter of Irene Doukaina and Emperor Alexios I Komnenos, used her physician’s mindseye to describe a certain Norman knight, Bohemond, Prince of Oranto: “[He had] a wit that was manifold and crafty and able to find a way of escape in every emergency. For in the whole of his body the entire man showed implacable and savage both in his size and glance, or so I believe, and even his laughter sounded like roaring. He was so made in mind and body that courage and passion reared their crests within him and both inclined to war.”

In addition to her medical practice, and the management of hospitals, she was trained in literature, rhetoric, astronomy, history, mathematics, geography and military strategy. Born porphyrogenita, literally “to the purple” – meaning after her father became Emperor – she also wrote the Alexiad, an account of her father’s reign, illuminating the Crusades from a Byzantine perspective. 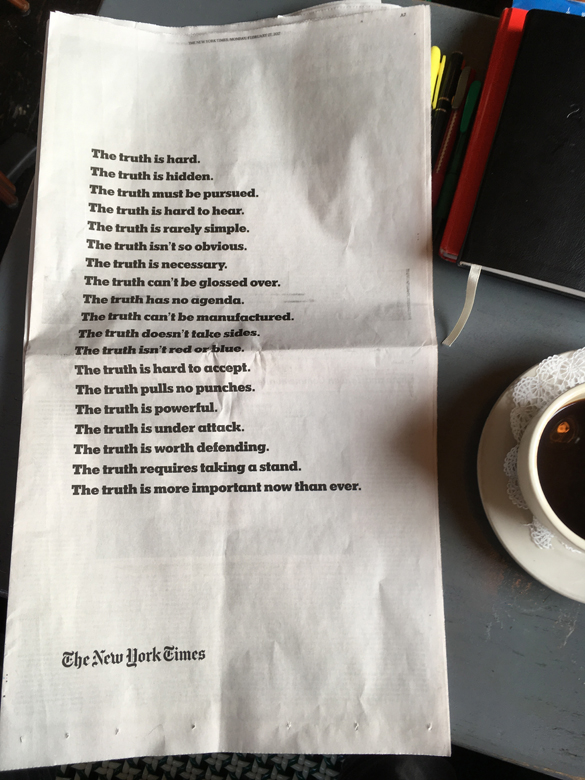 Substitution game: “The Times” for “The Truth…”

For the times they are a changeling…

Diplomacy, as Anna Komnena knew, is ineffective in dealing with Normans. Their own eleventh and twelfth century chroniclers ascribe their success in conquest to a “set of innate psychological characteristics, rather than advanced technology or strength” per se. The Normans cultivated, to some degree deliberately, “an image of irrational brutality in order to foster terror and submission in their opponents. This combined with their rugged mindset and prowess at arms, enabled them to achieve their immediate aims: gaining land, wealth, and titles in lands as far-flung as Sicily, Ireland, and, for a time, the Holy Lands of the Middle East.” [Bisio, op. cit. pp. 74-75]

More systematically, the Romans cultivated internally, and externalized militarily, a strategy of terribilitia – the word, when used in Italian with an accent on the final “a” was frequently applied to Michelangelo, in particular to the quality of his Old Testament sculptures, as well as to his neoplatonist followers, Ficino et al. The Romans have been cited often as an example of how “violence can acquire its own legitimacy as a strategy.”[ibid.]

“Only in the most unusual circumstances,” writers military historian Alvin Bernstein, “did the Romans not go to war.” Further, the threat of violence, in this case Roman “armed suasion,” allowed for the conservation of forces, i.e. troops need not be stationed all along the empire’s borders. This depended, to some degree, “on a willingness to do battle and a demonstrated ruthlessness.” [ibid.]

when asked about the hostility of the Church to the Soviet Union is reported to have retorted: “The Pope! How many divisions does he have?”

Stalin also reportedly once mused that quantity has a quality of its own.

It’s all the same to the calm

I’ve looked at pork from both sides now…

I’d like the gluten-free borderline crêpe with cheese extensions and rat.

We’re out of rat, sorry.

Mouse then, or wait, do you have coati tails?

Yep, just in fresh this morning.

Great, but hold the rings…

The buildings, bombs and phones are smart so the people can be stupid

And yet… “In Daoist meditation and inner alchemy, the inside of the body is visualized as a mountainous landscape that reflects the forces of Heaven and Earth that are manifest in human beings.

“Diagrams like the Nei Jing Tu show a person seated in meditation configured like a Chinese landscape painting. In the head, there are high mountain peaks; in the spine, a winding mountain path; in the neck, a many-storied pagoda; in the lower abdomen, a deep body of water. The word for lanscape in Chinese is Shan-Shui (mountain-water). The Chinese view mountains and water as the very quintessence of nature. Hence mountains have been referred to as the ‘bones’ of the earth, and water as its ‘blood…’

“The inner world depicted in the Nei Jing Tu is not just a representtion. This landscape depicts the movements of the Qi and breath through the human body. However the Qi it depicts flows not just through the body but through Heaven and Earth as well.

“What shapes and transforms the terrain ‘out there,’ equally shapes and transforms the terrain within us. When looking at a landscape, the painter sees the places where Qi collects and dissipates, the interplay of coming into being and fading back into the indeterminate primordial state. In Chinese landscape painting, the painting is permeatied with precisely the same Qi that permeates the landscape itself. The Qi / Xiang or Qi / Breath / Image is exactly the same externally as it is ‘inside’ the painting.

“In the Nei Jing Tu what is ‘outside us,’ perceived in terms of configurations of the Qi in the world around us, is depicted as simultaneously ‘inside us.’ There is no separation, because the same configurations of Qi and breath bring into being and flow through everything – the world around us, the landscape, the painting of the landscape, the inner landscape of our body and even the painting of the inner landscape of our body.” [Tom Bisio, “Monks, Meditation, and Mountains: The Body as a Sacred Landscape in Daoism: Part 1,” New York Internal Arts Newsletter, February 28, 2017]

What is the etiology and progression of Male Hysteria?

When our perceptions and awareness are damaged or depleted, we compensate by projecting. We tend to project in inverse proportion to our lack of awareness.

There is the un-naming and the unnamable.

Boil them cabbage down

Strategy as a “mental tapestry of changing intentions for harmonizing and focusing our efforts as a basis for realizing some aim or purpose in an unfolding and often unforseen world of many bewildering events and changing intentions and many contending interests.” [Bisio, op. cit. citing Col. John Boyd, p. 88

The feelings of mountains and streams, grasses and trees, are not far from those of humans, and it is wrong to think of them as nonsentient. That a stream should dry up in times of disorder is an ordinary, natural reaction. Wrote Liu Zheng, seven hundred-odd years ago.

Butter-fly has wings of gold.

Bed-bug got no wings at all,

But he gets there just the same.

Boil them cabbage down, down

Turn them ho-cakes round, round

Only tune that I can sing is

Boil them cabbage down