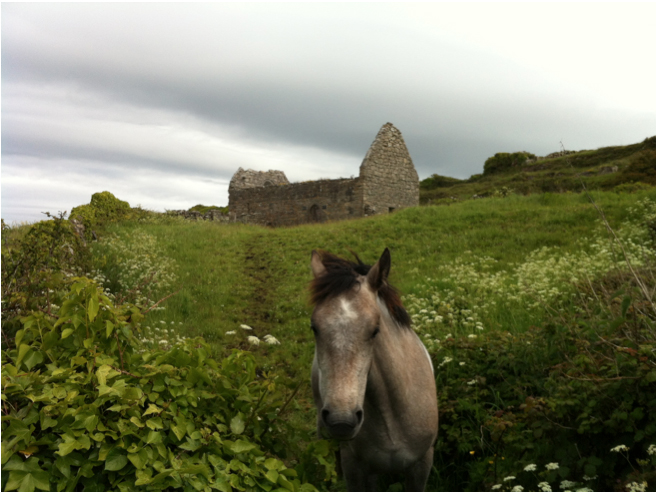 I seem to have strayed a long way from our subject, but our subject is social and historical – and continuous.

In these pages I will address the situation of the artist, and, in particular, the writer. More specifically, the relation of language and power within the practice of writing.

My approach will be at times oblique, at others direct. The form I’ve chosen is a collection of texts, some written by me, some by others, intended for interpretation by the reader according to the contents and disposition of her or his own internalized “cabinet” of curiosities and wonders.

By presenting these fragments as artifacts possessing both distinct qualities and a resemblance to other objects, I hope to articulate a liminal, even tidal, realm where art and nature meet – and the alchemy of language and meaning occurs.

Please note: despite the button above, this site does not accept comments. I can, however be reached by email at edarton@earthlink.net

Seven, eight or is it nine birds flying parallel to the Inishmore ferry? Or fourteen, sixteen, eighteen, since they skim the water and their shadows appear and vanish with the rolling waves. Do they multiply and subtract via some law known perhaps to others, though not to you? Which of the birds are shadows and which built of material stuff? Are they in the same moment real and illusory? Is the illusory an aspect of the real?

Beating the Herring out of Town: a traditional ceremony wherein the Butcher’s Guild, in procession, flogs a herring, through the streets of Cork at the end of Lent. The herring stands for abstinence, for mortification of the flesh, and the return of plenitude is celebrated with great organized calamity. Thankfully, this scene was recorded by the seventeenth century painter Nathaniel Grogan. It now hangs in the Crawford Art Gallery, Corcaigh.

I had read, some years ago, Brian Friel’s Translations, and been profoundly educated and moved by it, but remained incompletely aware of the violence done to the Irish at the level of language during the period of the English ordnance survey of the early 19th century. It took being physically present in Ireland to discover, once again, and at a deeper level, via the inescapable specificity of a history in which An Daingean found itself Dingle; Cill Airne, Killarney; Baile an Bhuinneánaigh, Ballybunnion; and Corcaigh, Cork, the degree to which words of all kinds – from the most planted of nouns to the nimblest verb – function as repositories of power and operate as subjects within an ages-old game of domination and sublimation.

Adam marches to the sea, all the while renaming Lilith’s menagerie. The war is over, and the struggle is on.

Tendencies and impulses which are protected from cognition are powerful precisely in relation to the degree to which they remain unthought. When the unthought becomes thinkable, new modalities of action proliferate, but these may not be cognitively grasped or integrated. When wider and wider terrains of action are precluded from cognition, the empire of the mind shrinks into a capital city besieged, plundered and ultimately razed by its incommensurable impulses.

The lad called Wynfryth, born in southern England shortly before the turn of the 8th century, was, in 719, renamed Boniface by the pope. Boniface’s missionary work focused on the border between Hesse and Thuringia. It was there, near Geismar, in 723, that Boniface felled the pagan Donar Oak, demonstrating to the as-yet unconvinced the impotence of the old religion. Subsequently appointed archbishop of Mainz, Boniface helped organize the diocese of Bavaria. Murdered by robbers in 754, the bones of the “Apostle of the Germans” may be venerated today at the monastery he founded in Fulda.

If the Normans disenchanted England, the great English project became the disenchantment of Ireland and eventually every place else on which their sun could not be permitted to set. But as, for example, in the attempt by whites to excise the souls of blacks on these shores, the assault was only partly successful and thus turned against the perpetrators. The obliterative drive became, in the end, a mockery of the masters’ inability to annihilate the “essential” nature of their subjects – a circumstance that produced rage in both masters and subjects and, in the former, an ungovernable desire to see their power affirmed if only in the degradation of the other.

As inheritors of this tradition, the citizens of the nation known as the United States of America have – often unconsciously, since consciousness might force an examination of this dynamic – multiplied the sins of their fathers at a global scale beyond anyone’s wildest nightmares.

What, then, will the American writer’s tactics be? From what awareness might they arise?

In the middle ages, the church of Saint-Léonard-de-Noblat, near Limoges, became a popular medieval pilgrimage site. This was due less to its position on the road to Compostela, than to its patron saint’s renowned efficacy at liberating prisoners.

Animals offer their opinions on a variety of subjects in The Fable of the Ancients written in 13th century Spain by the kabbalist Isaac ben Solomon abi Sahu. In one tale, creatures depicted as a unicorn and a ram, discourse on the wickedness of hunters.

Larimar is a rare, blue pectolite found only in the Dominican Republic. Its color, resembling so closely the waters of the Caribbean, makes it easy to believe the legend that it originates in the sea. In 1916, a local priest, realizing bits of it washed downstream from the Barhoruco Range, unsuccessfully petitioned the government for permission to mine it. Sixty years later, Larimar was “rediscovered” on the beach and received its current appellation, a contraction formed by the first syllable of Larissa, the name of the rediscoverer’s daughter, and mar, the sea.

“Globalization is itself a magical incantation.” Says Zygmunt Bauman.

France did for Baldwin what it has done so often for refugees of all sorts of backgrounds and temperaments: it disclosed the possibility of human freedom in a way that was absolutely irrevocable – one could almost say inalienable. It revealed the existence of one’s innate freedom, arousing and affirming the internal claim by insisting – in a very different manner than Christ accepts the sinner – that one is a true human subject. Among the multitude. Of others.

In the period when Burke and Pitt could stir the Commons to deep emotion by an apt line of Latin verse, there was a standard of culture which could afford to use classical allusions for the adornment of living. But not so with the merchant princes who succeeded the old gentry in the main responsibility of ruling and spending. They were inclined to prefer the Gothic forms to the Grecian, as being appropriate to the industrial feudalism which they maintained. But they had a strong instinct for ‘improvement,’ for the gorgeous and massive.

If you see the teeth of the lion, do not think that the lion is smiling at you.

Every effort was made to please the new taste. Mahogany had ‘come in’; and ormolu, and they soon lost their elegant French airs. Furniture, hangings and upholstery grew more and more impressive, chairs and whatnots, carpets and wallpapers assumed an aggressive, dominating air. They did not need to satisfy contemplation, but they must excite sensations, whether of curiosity, astonishment or intimidation.

This character reflects perhaps the mind of the craftsman, who made the Victorian furniture, no less than that of the patron. The hardest patronage to serve is that which knows not its own mind, which is ambitious and inarticulate, insisting on discordant features which would cover its poverty and ignorance of taste with the appearance of richness and the pretense of learning. The craftsman is irked; he knows not what irks him, but his handiwork communicates the irk. And the Victorian workmen did their best with that willing pride in almost insuperable undertakings which was characteristic of their faith: which made unity of style, of which they were not ignorant, seem of much less consequence to them than it now seems to us, who seek to recover it through perplexity and confusion.

Through the industrial revolution (as Chesterton points out) the word ‘master’ ceased to mean a man who was master of his craft and came to mean one who was master of others. The meaning of ‘shop’ changed too. In the eighteenth century, a shop was a place where things were made. By degrees the shop-window acquired importance, as the place where goods were put to sell, or at least to attract attention: it assumed and amplified the function of the old hanging signs. Still the work was done on premises; the master attended to all that was made in the shop and was able to do it himself.

After this came the partnership between the master-craftsman and a business man, who took no part in the actual making, but attended to the very necessary work of book-keeping, reckoning costs and prices, paying accounts and wages, organising the firm’s output and extending its connexions. With the introduction of factory machinery and the immense improvement of transport (canals and railways) the labor of those who, with simple methods, had done piece-work in their homes became organized under the direction of the more able and enterprising master-men. With the increasing competition in cheap production which followed, it was almost necessary for the master to expand his business by means of borrowed capital. So, from a partnership of several business men who were not craftsmen, arose the Limited Liability Company.

Early in the twentieth century, a Manchester firm produced some cotton-prints from patterns which had been cut by children and for a moment it seemed that an ideal was coming true: that art, instead of being the occupation and amusement of a few individuals, was a common right, a common power, if only it might be allowed to live…

I was halfway poem when the rain came down…